← back to
Légère Recordings
Get fresh music recommendations delivered to your inbox every Friday.
We've updated our Terms of Use. You can review the changes here.

An Introduction To Gabriel Tajeu 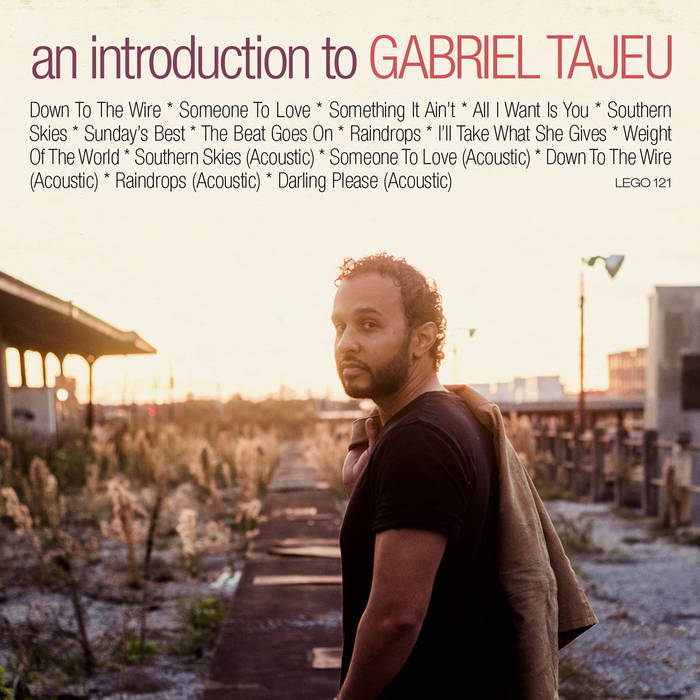 Alabama is home to a broad range of influential musicians and artists, stretching from the blues, to gospel, to rock. But the musical royalty in soul and R&B is paramount, practically insurmountable to beat. The heartbeat of soul music may be traced to Motown or Stax, but Alabama’s FAME Studios —most recently documented in the critically-acclaimed Greg Camalier documentary Muscle Shoals, was where the Staple Singers cut “I’ll Take You There,” where Percy Sledge originally belted “When a Man Loves a Woman,” where Candi Staton pulled off a soulful read of Tammy Wynette’s “Stand By Your Man,” where Etta James fired up “Tell Mama,” where James & Bobby Purify recorded “I’m Your Puppet,” and where Jerry Wexler brought the eventual Queen of Soul Aretha Franklin to record Dan Penn’s golden composition “Do Right Woman, Do Right Man.” Others like Wilson Pickett, Otis Redding and many of the acts at Memphis’s Stax/Volt Records, even rock icons like Paul Simon, Cher, Bob Seger and Leon Russell, would flock to Rick Hall’s campgrounds hoping to capture a taste of that “sweet soul music.” Today that sound pervades the indie soul coming from Gabriel Tajeu. With a unique blend of soul, pop, and jazz, this gifted singer-songwriter has poignantly demonstrated the sound of Alabama on his first two albums, 2013’s Finding My Way and 2015’s Southern Skies. This compilation combs together some of the highlights of both albums and serves as the perfect introduction to his rich library of diverse music. Tajeu’s brother, Ledama, an accomplished trumpeter and one of the chief horn arrangers on both albums, described Gabriel’s sound best. “He doesn’t try to fit into the R&B box or the jazz box. He does it all, which is what separates him from other people who try to stay in one genre of music.” Allen Barlow, a co-producer on Southern Skies, agrees with that assessment: “He spans different genres. He’s got a folky side as well as a good classic R&B side, but he’s adventurous.”

Raised on a rich musical diet that included Prince, John Mayer and the first-generation of neo-soul kings, Tajeu began his musical career supplying vocals for Alabama-based hip-hop duo Ivory Soul. He later joined Birmingham cover band Bonus Round, a group that featured some of the area’s finest musicians — drummer extraordinaire Mark Lanter, St. Paul and the Broken Bones’ trombonist Chad Fisher and guitar pros Allen Barlow and Allen Stone, just to name a few. Within this brotherhood, Tajeu felt the urge to compose his own music. They would accompany him on his first album, a robust collection of neo-soul and R&B blessed with such standouts as the neo-soul-brewed “Weight of the World,” the funky “Something It Ain’t,” and the midtempo jam “Raindrops.” “This was my first statement to the world,” he says of his first record. “It was establishing me as an artist and introducing my sound.”

Southern Skies, Tajeu’s sophomore LP, incorporates even more musical stylings and dips into explorations of country and rock. While songs like “Someone to Love” and “Down to the Wire” focus on his R&B craft, “Sunday’s Best” and the twangy title track freely explore the world of calm country soul. “I was building off what I did on the first record so I highlighted the musicality of those songs and showcased what kind of talent was around,” Tajeu says. He even pens a song partly inspired by the political uprisings and social injustice of the world (“The Beat Goes On”). “I’ve been trying to write songs like that for a very long time,” Tajeu asserts. “But it’s difficult to write a song with a social message that also checks the boxes of not feeling forced while being catchy in the Marvin Gaye type of vein, like when we listened to ‘What’s Going On.’”

To help develop that sound on Southern Skies, Tajeu would make the pilgrimage to the legendary FAME Studios in North Alabama to record the rhythmic layout for several of the tracks. Knowing its cultural significance for birthing some of the greatest records in history, he made the trip to FAME a top priority and featured two legendary musicians from the original Muscle Shoals Rhythm section — bassist David Hood and keyboardist Spooner Oldham. “It does have a vibe,” Lanter says. “You can’t be in there and not acknowledge the photos on the wall of the people that have recorded countless classic albums and singles. Sitting across the room from David Hood and cutting tracks there was an incredible experience.”

Many incredible engineers worked on the records, but Gabriel and Ledama both credit the contributions of engineer James Bevelle for the aural success of the two albums. When confronted with the accolades, he seems humble, almost too shy and surprised to respond. “When Gabe came in here with the first record and played the first song, I knew where he was going with this. I never really think about the accolades. I just like making good music.”

Bandcamp Daily  your guide to the world of Bandcamp

Sampa The Great joins the show to discuss her release, "As Above, So Below".